Can your marketing strategy use a little humor? 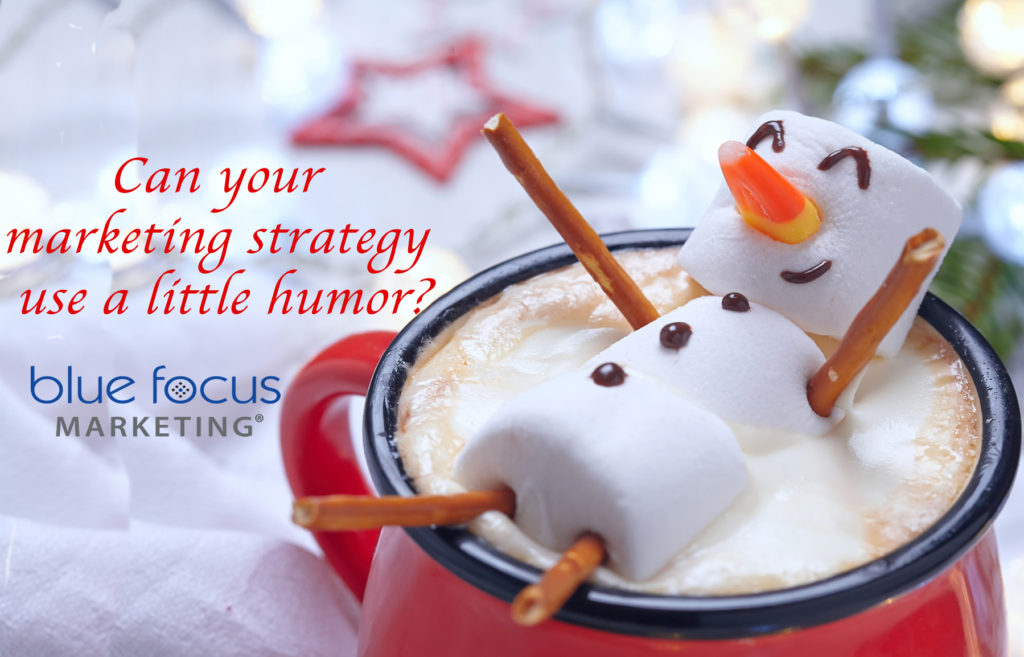 Everyone likes a good joke. So why not make it part of your marketing strategy?

Need a good laugh? We thought you might. Here, check out this pitch-perfect parody of professional thought leaders. You’ve earned it:

For bonus points, read through some of the comments to see how viewers perpetuate the game laid out in the video. Clearly, not only does the audience get the joke, they also want to keep it going (something you can’t always say about YouTube commenters!). At over 1.5 million views and 500-plus responses, clearly this tongue-in-cheek takedown of thought leaders struck a chord with a lot of people.

Effective communication is about contrasts. Whether you’re selling cars or pancakes, enterprise software or innovative gizmos, your brand can probably stand to lighten up every once in awhile.

Why? Because being dead serious all the time is ineffective. Simply put, you’re going to lose your audience’s interest. Nobody likes a downer (just ask SNL’s Debbie Downer). Of course, the inverse is true too; if you just told jokes all the time—or worse, if you presented everything with a bland, neutral tone—you’d be equally ineffective.

But here’s the big problem with being dead serious all the time: What happens when something really important happens? How do you distinguish an urgent message that deserves serious consideration? By changing things up, by varying the tone and delivery of your content, you help your community understand how to respond appropriately.

Admit it: That TED-inspired parody struck pretty close to home. Don’t worry, it did for us here at Blue Focus Marketing too, but that didn’t stop us from laughing—or from learning from it.

So what do we learn? First, we learn that this style has been incredibly effective. After all, no one really bothers to parody ineffective things.

Second, we recognize a formula that has clearly been successful for thought leaders over the past decade. In truth, a lot of these elements are right out of the public speaking 101 playbook. We all understand that the way we dress for a presentation matters, as does our use of personal anecdotes, humor, and repetition. So here, the parody is simply reflecting tried-and-true speaking strategies.

But in the little details—the darkly lit room, the slide show, and yes, the hilarious “photo of Earth” moment—we see the humor. The video becomes a sendup not of public speaking in general, but of our particular way of speaking in modern business communities.

But here’s the real lesson: You want to stand out in your own presentations? Watch the video. Map out what the “thought leader” does, and dare to do something different. You probably don’t need to reinvent the wheel, but to really distinguish yourself, it’s best to at least modify the cookie-cutter thought leader template in some way.

The bottom line is this: Everyone likes to laugh. And according to data, they especially like to laugh on Fridays. It’s human to crave variety in the content we view. Just as it’s human to seek community—and humor does this exceptionally well.

Think about it: If a good piece of lighthearted content can get your fans to say, “This is just what I needed after the kind of week I’ve had,” then you’ve just strengthened your community bonds—and likely earned a few shares and retweets in the process.

Chances are, you’ve been on the customer end of this. It felt good, didn’t it? So why not share that same feeling with your own online communities?

We want to know what makes you laugh. Share your marketing and social business humor in the comments!

Mark Burgess, co-author of The Social Employee -- a best-seller on How Great Companies Make Social Media Work. He is president of Blue Focus Marketing, a leading Employee Experience (EX) services consultancy, delivering e-learning, employee engagement, content marketing, and social media marketing solutions. He is an experienced digital marketer, content marketing strategist, speaker, blogger, and educator. Mark delivered a TEDx Talk on “The Rise of the Social Employee.” Mark’s career spans marketing, advertising, professional services consulting, and education. Mark has held senior-level marketing roles at PwC, AT&T and McCann. Mark is listed on Forbes as Must-Follow Marketing Minds on Twitter, and is a Top 200 Content Marketing influencer. He is an expert trainer for the American Marketing Association (AMA) delivering Content Marketing workshops. Mark led the PwC Global Web team. At McCann, he headed the flagship L’Oreal account. At AT&T, Mark was in charge of interactive marketing. Mark is an adjunct marketing professor teaching MBA marketing courses at Fairleigh Dickinson University. On the Rutgers Business School faculty for executive education delivering training modules on Content Marketing, Digital Marketing, and Social Media Marketing. Mark is a contributor to Wharton’s Advertising 2020 Project and their book, Beyond Advertising: Creating Value through All Customer Touchpoints. Mark’s article on “Piloting the Future of Social Business – Branding from the Inside Out” was published in Harvard Business Review Italia. He has won two EFFIEs for marketing excellence. Follow him on Twitter @mnburgess, @SocialEmployee, and @BlueFocus.