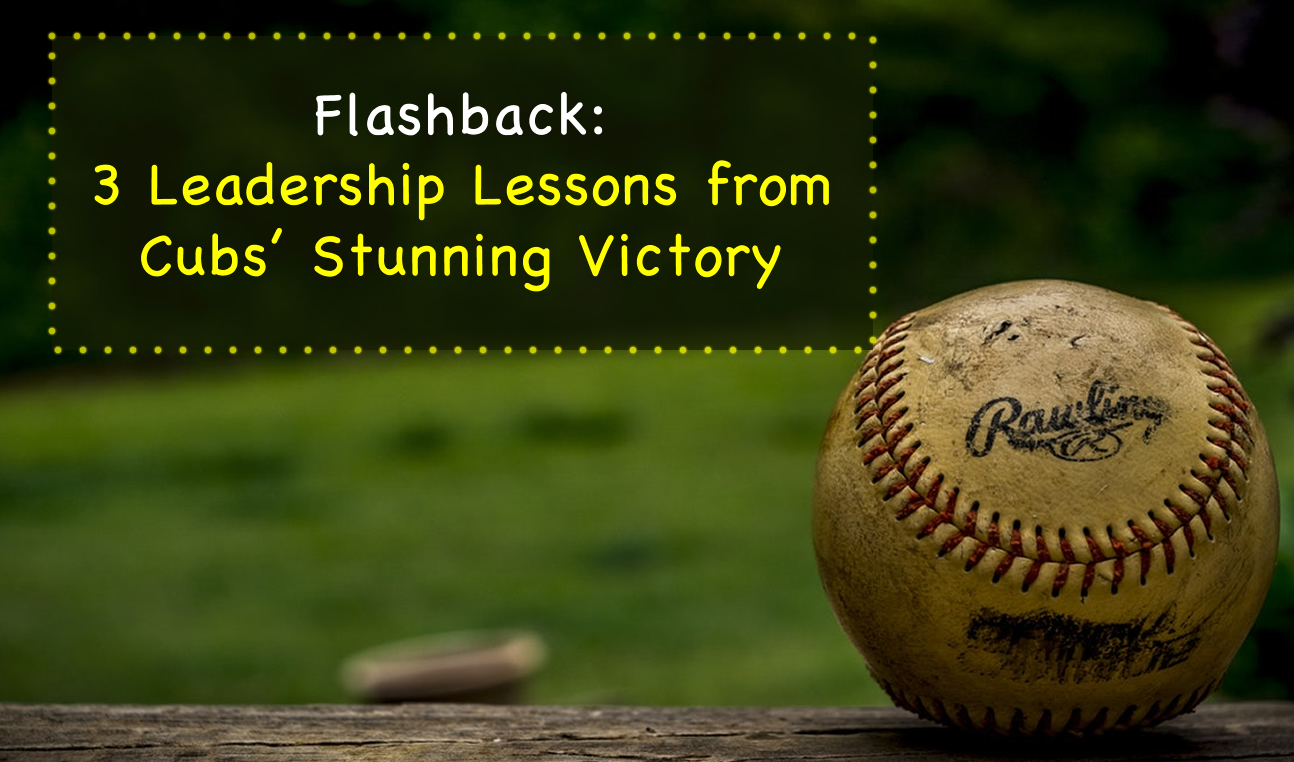 Summer is finally upon us—and with it, break time. Kids are on summer break, parents are negotiating with their schedules to squeeze in a much-needed break, and baseball, that most honored of summer traditions, is headed into the All-Star break.

As baseball’s best and brightest stars get ready to face off in Miami, I found myself thinking back to the Chicago Cubs’ stunning 2016 World Series victory last fall.

Forget how it all went down? Here, go ahead and watch that historic final out again. I’ll wait.

Marketers would kill for the raw storytelling potential inherent in the Cubs’ long legacy (though maybe not the 108-year losing streak). And truly, their woeful tale is something the team has been able to capitalize on again and again. Everyone likes an underdog story, especially one with black cats, the curse of the goat, and poor, poor Steve Bartman.

But all these narratives aside, marketers could stand to learn a few other things from the Cubs’ long road to success. Here are three big takeaways.

There is no question that Cubs skipper Joe Maddon is exceedingly good at his job. He managed the small-market Tampa Bay Rays to a winning record during his long tenure down in Florida. So it was no surprise when Cubs management immediately snapped him up prior to the 2015 season so he could hone their rebuilding team on the field.

But no manager is perfect, and some of Maddon’s choices almost led to a very different Game 7 outcome. From Forbes:

Maddon almost played the goat in Game 7 with his quick hook of starter Kyle Hendricks and the curious move to have Baez try a safety squeeze with two strikes, which he bunted foul to strike out. Closer Aroldis Chapman also looked shot after throwing 97 pitches over the past three games, including a potentially unnecessary five outs with a five-run lead in Game 6.

In content marketing, the similarities are readily apparent. Unlike baseball, whose basic rules have gone essentially unchanged over the years, content marketing is in a constant state of flux. Because it’s a fundamentally new and developing field, the strategies that worked one day might not work the next.

This makes having a long-term strategy essential to the success of your content marketing campaign. And in fact, it’s something a lot more managers should be doing. This strategy should be flexible and adaptive, but it should never stray from the brand’s core mission, vision, and values.

It goes without saying that even the best managers are going to slip up from time to time. But with proper alignment and communication of objectives, they can build a team culture where the slip-ups aren’t catastrophic.

Leaders set the tone. Employees carry it out

Speaking of team chemistry, the argument could be made that it was Maddon’s tireless culture building efforts that ultimately propelled the Cubs to their dramatic World Series victory.

In Game 7, after blowing a five-run lead, the Cubs found themselves tied at six runs apiece heading into the 10th inning—extra innings. Heightening the drama was good old Mother Nature, whose sudden eruption caused a brief rain delay.

Rather than head into the clubhouse to mope and figure out what went wrong, the Cubs players had a different idea. Quickly, veteran player—and first-year Cub—Jayson Heyward called a team meeting. From ESPN, here’s what Heyward had to say about that fateful moment:

“It’s about the whole team,” Heyward said. “It’s about everybody trying to get something done. I let them know that I loved them. … We needed 114 wins, and I told them that everybody in this room, right now, was going to 114.”

And go to 114 they did. As the tarps came off the field, the Cubs stepped up to bat with a renewed vigor and focus. Wasting no time (and shaking off the game’s many missed opportunities up to that point), they tallied the two runs they would need to secure their place in history and wrap up what some have called the greatest World Series game ever.

Whether in baseball or marketing, this is what strong social leadership looks like. Set the tone, build the culture, and let your employees take it from there. As ESPN’s Bradford Doolittle writes, “It’s like parenting—you teach your children well, and then trust they will follow the lessons they’ve learned.”

Of course, the Cubs players would never have been in a position to win in such dramatic fashion if it wasn’t for the tireless work put in by the team’s front office over the previous five years. It all began with the hiring of the general manager Theo Epstein—who not a decade prior had helped the Boston Red Sox shake of their own curse with a couple World Series victories of their own.

Epstein and the Cubs’ ownership knew the biggest payoffs often require the greatest patience. The road ahead wouldn’t be easy, but the reward would be baseball immortality—and a team poised for long-term success.

In the Cubs organization, I see echoes of Blue Focus Marketing’s own social ecosystem model. In the social ecosystem, the social governance council (SGC), much like a team’s front office, establishes objectives, identifies key assets, and determines metrics for success. In so doing, they create a roadmap for the future, and through their own advocacy, help to secure buy-in for their vision.

Next is the employee experience (EX). At this stage, the SGC works with management, as the front office does with skipper Joe Maddon, to put their objectives into practice through the cultivation of talent, culture, and proven best practices. Even the best blueprint requires the right managers in place to bring it to reality, people who are committed, adaptable, and able to keep an eye on the big picture while overseeing the day-to-day.

Then comes the fun part: The customer experience (CX). With proper training and leadership, your team is primed to perform. And the best teams are able to deliver an experience that isn’t just satisfying, but unforgettable. They buy into the process completely and understand that when they’re on the field, they’re not just representing themselves, but the history and culture of their team.

As with any properly function ecosystem, this process must be renewed day after day, month after month, year after year. Sure, we may all be celebrating the Cubbies’ accomplishment now, but you can bet that their front office is already hard at work on next year’s campaign—learning, fine-tuning, and acquiring new talent to ensure their team they won’t have to wait another 108 years before tasting glory once more.

And if the most hard luck-team of all time can do it, you can too.

Mark Burgess, co-author of The Social Employee -- a best-seller on How Great Companies Make Social Media Work. He is president of Blue Focus Marketing, a leading Employee Experience (EX) services consultancy, delivering e-learning, employee engagement, content marketing, and social media marketing solutions. He is an experienced digital marketer, content marketing strategist, speaker, blogger, and educator. Mark delivered a TEDx Talk on “The Rise of the Social Employee.” Mark’s career spans marketing, advertising, professional services consulting, and education. Mark has held senior-level marketing roles at PwC, AT&T and McCann. Mark is listed on Forbes as Must-Follow Marketing Minds on Twitter, and is a Top 200 Content Marketing influencer. He is an expert trainer for the American Marketing Association (AMA) delivering Content Marketing workshops. Mark led the PwC Global Web team. At McCann, he headed the flagship L’Oreal account. At AT&T, Mark was in charge of interactive marketing. Mark is an adjunct marketing professor teaching MBA marketing courses at Fairleigh Dickinson University. On the Rutgers Business School faculty for executive education delivering training modules on Content Marketing, Digital Marketing, and Social Media Marketing. Mark is a contributor to Wharton’s Advertising 2020 Project and their book, Beyond Advertising: Creating Value through All Customer Touchpoints. Mark’s article on “Piloting the Future of Social Business – Branding from the Inside Out” was published in Harvard Business Review Italia. He has won two EFFIEs for marketing excellence. Follow him on Twitter @mnburgess, @SocialEmployee, and @BlueFocus.