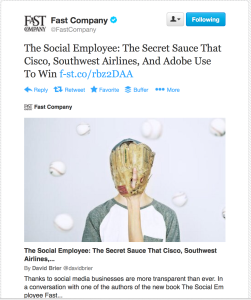 It’s hard to believe it, but our McGraw-Hill book The Social Employee has now been on bookshelves for nearly two months. Since its release, the book has been a mainstay on several Amazon best-seller lists in business.

We’re very excited to see the response The Social Employee is receiving and the conversations it’s begun. It sometimes felt a little agonizing keeping quiet about all the exciting things we were learning as we were researching and writing the book. But now all that patience has paid off, and we get to celebrate the rise of the @SocialEmployee revolution with the rest of you!

Last week, the wonderful David Brier (@davidbrier) featured our book in an article for Fast Company titled “The Social Employee: The Secret Sauce That Cisco, Southwest Airlines, and Adobe Use to Win.” In addition to sharing his own thoughts on the book, David was gracious enough to interview me for his feature as well, which gave me the chance to practice condensing our key ideas into a handful of short answers. But as Albert Einstein once said, “If you can’t explain it simply, you don’t understand it.” Hopefully I acquitted myself well!

And if it wasn’t cool enough to see The Social Employee’s image on the Fast Company site, it was an added bonus to see @FastCompany tweeting about it, too:

The Social Employee: The Secret Sauce That Cisco, Southwest Airlines, And Adobe Use To Win http://t.co/OOfMhXCqnr

While seeing ourselves up on the web like this is certainly a lot of fun, we are especially grateful that these brand stories are getting out into the world. At the end of the day, the real innovators are the companies we interviewed: IBM, Adobe, AT&T, Dell, Cisco, Southwest Airlines, Domo, and Axciom. We were just the ones lucky enough to get to report on their success so that other businesses could learn from their examples.

Have you read The Social Employee yet? Share your thoughts on the book or the interview in the comments below!